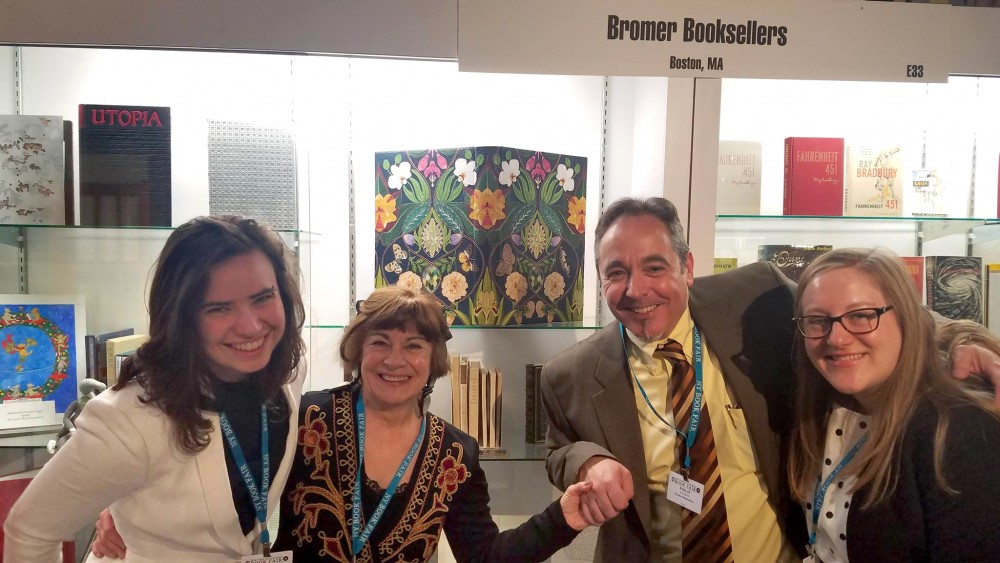 Bromer Booksellers specializes in the book beautiful, specifically, fine and private presses, miniature books, designer bindings, illustrated books, pop-ups and movables, and antiquarian children’s books and toys. We travel the world seeking the finest books in our fields of interest and have purchased important private collections in this country. We handled the miniature book collection of legendary retailer Stanley Marcus. From the celebrated Estelle Doheny auction in 1989, we acquired the majority of her fore-edge paintings. The "Triple Crown" and Eric Gill collections owned by California collector Charles Gould are now permanently housed at Washington University in St. Louis. A superb collection of Rockwell Kent from a leading Nashville collector is now integrated into the treasures of the Boston Public Library. We have sold everything from medieval illuminated manuscripts to unique designer bindings. If you have books to sell, we encourage you to see our guidelines and to contact us.

Please check our Events page for complete information on upcoming fairs, exhibits, and other bookish things in which we are participating. We have issued over 150 catalogues and lists since our first one appeared in 1968, and we continue to publish catalogues in print and electronic form each year. We invite you to join our mailing list.

In 2018, we opened Bromer Gallery with a focus on the intersection between the book arts and fine art. The nine shows we have held since have featured works on paper by book artists such as Robin Price and David Esslemont, in addition to well-known designer and illustrator, Barry Moser.

In 1964, while Anne Bromer was enrolled in the Library Science program at Simmons College, students in her rare books course visited the Library at Williams College, whose special collections form the finest holdings in an undergraduate institution. Her husband, David, was invited to come along. Richard Archer was Curator of Chapin Library's rare book department and the professor for Anne's course. He unlocked the cabinets and vaults, putting the books into the hands of his students. From that encounter with magnificent medieval manuscripts and finely-printed early and modern press books in the Chapin's stately room, the seeds of a vocation took root. Four years later, Bromer Booksellers issued Catalog One.

In 1974, Anne began selling books full time and joined the Antiquarian Booksellers Association of America (ABAA). David joined the firm in 1976 and became an associate member of the ABAA. During the recession of 1980 the business moved to the heart of Copley Square. After more than four decades, Bromer Booksellers can still be found at 607 Boylston Street.

Anne has lectured, authored multiple articles, and written two books: a biography of Dorothy Abbe, which was published as Strings Attached in 2000; and a full color history on the subject of miniature books, Miniature Books: 4,000 Years of Tiny Treasures, co-written with Julian I. Edison and published in 2007, which received First Place in the category of Gift Books at the New York Book Show in 2008.

Anne received the Alumni Achievement Award from her alma mater—Simmons College Library School (which became Simmons University School of Library and Information Science)—in 2008. She is an active member of the St. Botolph Club, a private organization devoted to the arts, and the Society of Printers, and she has lectured at both organizations.

Anne and David were partners in life and the business of booksellering for over 50 years. In 2008, David was diagnosed with Alzheimer's Disease. In 2011, with the assistance of Shannon Struble, David completed over twenty years of research and published Aun Aprendo: A Comprehensive Bibliography of the Writings of Aldous Leonard Huxley, the most current and comprehensive descriptive bibliography of Aldous Huxley's works ever produced. David died on Thanksgiving Day, November 25, 2021.

In June of 2000, Phil Salmon joined Bromer Booksellers as Manager. Phil began his bookselling career in 1994, the consequence of a collecting interest in the poet Robert Frost. He spent many years working as a freelance cataloger and book scout, and operated his own internet bookselling firm before moving to Portugal in 1998. In his time with the firm, Phil has become an integral part of the company, attending auctions, exhibiting at book fairs, and handling other key responsibilities. In 2013, he helped shepherd the Albion press that printed the Kelmscott Chaucer to its current home at the Rochester Institute of Technology, acting as their agent at auction. He has also performed numerous appraisals for institutional customers, including a significant portion of the Gore Vidal archive, and the State Library of Massachusetts' copy of Audubon's Birds of America double-elephant folio. Phil became an associate member of the ABAA in 2004, and considers it "an honor and a privilege" to do what he loves for a living.

Shannon Struble is a native Michigander, who moved to Boston in 2007. That year, she began as a part-time worker at Bromer Booksellers, maintaining the website and designing catalogues, both electronic and printed, while she attended graduate school at Simmons College (now University). Shannon graduated from Simmons in 2010 with a Master's Degree in Library Science, concentrating in Archives Management, and in 2012 with an MA in History. Before her migration to Boston, Shannon attended Smith College, working her last two summers as a cataloger at Oak Knoll Books in New Castle, DE, where she caught the bookselling bug. She is now the full-time Office & Web Manager at Bromer, still maintaining the website and designing catalogues, but now also keeping the shop running and acting as the first point of contact for inquiries. It has been a great joy to be a part of this family and get the opportunity to not only work with the books she loves, but also experience new and exciting things every day.

As an incoming graduate student in the Simmons Library Science program in fall of 2017, Meredith Santaus joined Bromer Booksellers as a cataloger and shipper. She had begun her career in rare books as an undergraduate at Wellesley College, where she worked in Special Collections while earning her Bachelor's in Classics and English. She then completed a Master's in Book History from the University of St Andrews, with a capstone thesis on the role of William Clark's maps in the formation of American identity in the Early Republic. Meredith now also acts as gallery manager and curator for Bromer Gallery, which began in the fall of 2018 and gives her the freedom to indulge her passion for bridging books and visual art. The Gallery has featured a range of book artists, including Barry Moser, Robin Price, David Esslemont, and Shirley Jackson Whitaker. In 2021, Meredith curated Pressing Issues: Voices for Justice in the Book Arts, a catalog and exhibit of over 100 items charting over 100 years of book arts responses to social injustice. Pressing Issues received an update in 2022, and remains a key focus for Meredith and the rest of Bromer.