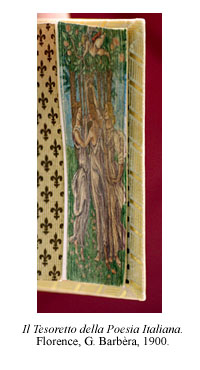 From the earliest period when books began to be printed and accumulated, artists and bookbinders embellished their covers with designs and illustrations. The painting of book edges developed later, but few readers have ever seen these decorations. They are an obscure art form, hidden beneath a surface of gold. When revealed, there is only wonderment! It is as if you discovered magic on a book before you even read its opening lines.
When you hold the covers of a book in your hands, you will see three edges and a spine. The top edge and bottom edge are obviously named, but the edge at which you open the book has an unfamiliar title. It is referred to as the FORE-EDGE. Originally this edge of the book was titled in ink for the purpose of identification. Then the old books were stacked one on top of the other with the edge facing outwards in order to read its title. In the beginning, there was no effort to beautify the fore-edge.


By the sixteenth century, a Venetian artist, Cesare Vecellio, devised a way to enhance the beauty of a book by painting on its edges. The images, mostly portraits, were easily viewed when the covers of the book were closed. A century later in England, Samuel Mearne, a bookbinder to the royal family, developed the art of the "disappearing painting" on the fore-edge of a book.
"Imagine a flight of stairs, each step representing a leaf of the book. On the tread would be the painting and on the flat surface would be gold. A book painted and gilt in this way must be furled back before the picture can be seen." (Kenneth Hobson, 1949). This is how a fore-edge painting works. When the book is closed, you do not see the image because the gilding hides the painting. But, when you fan the pages to show the painting at its best and hold them between your fingers or in a display press, the colorful picture appears as if by magic. 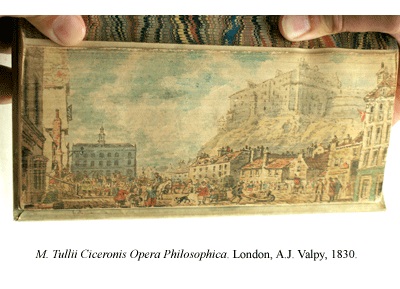 In the late eighteenth and early nineteenth centuries, fore-edge painting reached its height in England. The famous bookbinding firm, which is always referred to with "the territorial suffix" Edwards of Halifax, was responsible for this surge of interest. Artists were employed to paint landscape scenes with country estates on the fore-edges of books, which were then handsomely bound in painted vellum covers or in exotic leather bindings.

Most fore-edge painters working for binding firms did not sign their work, which explains why it is difficult to pinpoint and date the hidden paintings. A few binders did leave their marks. Taylor & Hessey, working in the early nineteenth century, stamped their name on the edge of the binding. The binder/painter from Liverpool working at the end of the century, John Fazakerly, combined colorful decorations with gold embossing on the edges of his bindings, which in themselves are works of art and easily identifiable.


In the early twentieth century, Miss C. B. Currie painted and signed her fore-edges, which are often found on bindings with painted ivory insets by Miss Currie. These are the exceptions, as most paintings are recognized only by their design. The "Dover" painter and the "Thistle" painter, for example, are twentieth century fore-edge artists whose paintings are presented unsigned. Through observation and study, we are able to learn the style of each.


In the twentieth century, the single fore-edge painting was expanded to include double fore-edges, an astounding feat of craftsmanship, where two different paintings can be viewed by fanning the pages in first one direction and then the opposite. Neither painting interferes with your view of the other. Another technique is to use all three edges of the book - top, bottom, and fore-edge - to paint a continuous picture, which surrounds the book.


In recent times, miniature books less three inches in height have been used as palettes to paint a fore-edge. The smallest of these are the three volumes produced in 1929, 1930, and 1932 by the Kingsport Press in Tennessee. In a fore-edge space of less than one inch, the portraits of Abraham Lincoln, Calvin Coolidge, and George Washington are painted to accompany the text related to each of the presidents. 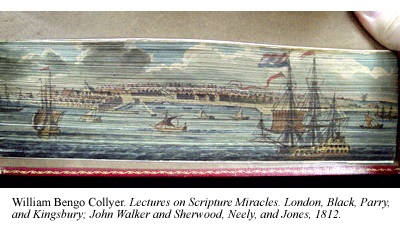 Hanson, T.W. "Edwards of Halifax," A Family of Book-Sellers, Collectors and Book-Binders. 1912.
Hobson, Kenneth. "On Fore-Edge Painting of Books". In The Folio. 1949.
Weber, Carl J. Fore-Edge Painting, A Historical Survey of a Curious Art in Book Decoration. 1966.