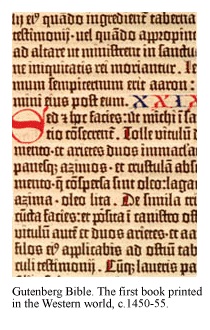 Printing in the Western world began with Johann Gutenberg and his monumental Bible of 1455. The invention of printing from movable type changed the production of books from being written out by hand, one at a time, to printed editions as we know them today. This led to a vast increase in the publication of books, encompassing a multitude of both religious and secular subjects. Books printed in the fifteenth century, known as incunabula (a term which refers to "the cradle" of printing), are prized as artifacts of the infancy of printing, as well as for their content.
While the earliest printed works mimicked the manuscript, the invention of printing inspired a flowering of type design to include gothic, roman and italic fonts. Typography, or the design of the printed page, became an important and alluring element as printers developed signature styles. The simplicity of the earliest printed books soon evolved as decorative initials began to cascade down several lines of text and methods of illustration became increasingly advanced. Woodcuts were the earliest form of printed illustration to appear, but later techniques such as copper engraving and aquatint incorporated capabilities of finer detail and color.
At Bromer Booksellers, our early printed books include works from the incunabular period through the 1800s, with an emphasis on typography, content, and illustration. We offer a select group of material, representing the greatest printers of their time, from Gutenberg and Koberger, to John Baskerville and Giambatista Bodoni. In addition, we offer a selection of Leaf Books - finely printed books that contain an original leaf from an early printing, along with a scholarly essay on the history of the book's production.