Twenty-six years after their last publication, Anne Bromer has written a memoir of the eleven printed miniature books she produced with her husband and partner David from 1977 to 1989. She relates brief stories of pleasure, coincidence, and difficulty for each book, followed by a detailed bibliographic description.

Jointly published by Heavenly Monkey, in Vancouver, Canada, and Bromer Booksellers of Boston, Massachusetts, the book is now available for order.

Set in 8-point Centaur and Arrighi types, the miniature book comprises 72 pages and measures 2 3/4 by 2 1/4 inches. Both editions were designed and printed at Heavenly Monkey and bound by Sarah Creighton. The decorations and vine patterns were designed by Francesca Lohmann.

The regular edition of 85 copies (1-85) is printed on Somerset Book paper and bound in a printed vine-patterned paper over boards. Seventy of these copies are available from Bromer Booksellers priced at $150.

The deluxe edition of 35 copies (I-XXXV) is printed on F.J. Head handmade paper. Each copy includes sample leaves from four Bromer miniatures. Original calligraphy on the title page and colophon by Lohmann. Bound in full leather with the vine pattern stamped in gilt. Issued in a folding box. Eighteen of these copies were available from Bromer Booksellers but are now sold out. 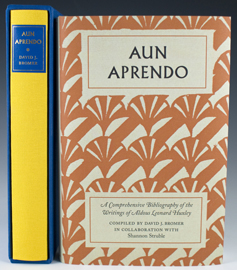 AN IMPORTANT BIBLIOGRAPHY ON THE WORKS OF ALDOUS HUXLEY
BY DAVID J. BROMER

We are very proud to present Aun Aprendo: A Comprehensive Bibliography of the Writings of Aldous Leonard Huxley, the most current and comprehensive descriptive bibliography of Aldous Huxley's works ever produced. It describes the first appearances of Huxley's works in the English language and identifies many previously unrecorded contributions to books, pamphlets, and periodicals.

The deluxe edition is limited to 50 numbered copies signed by the bibliographer, 40 of which are for sale. It includes a previously unpublished poem by Huxley dedicated to his first wife Maria and is presented in bright yellow cloth with a blue leather label on the spine in the manner of the British deluxe edition of Brave New World.

To learn more about the deluxe edition and to order, click here.

A trade edition of 400 copies is available through Oak Knoll Press.

Read a review of Aun Aprendo by Brian Cassidy here.

In 1977 the first book bearing our imprint was published. Our goal was to produce a private press edition in miniature format. The Butterfly's Ball and the Grasshopper's Feast, was a success and sold out on publication. During the next twelve years, we published a total of eleven letterpress printed miniature books and three miniature manuscripts.

In 1984, Richard Bigus designed and printed the first detailed book about printing on vellum under our imprint. Each copy of The Mystique of Vellum includes a parchment specimen. In 2000, Strings Attached, Dorothy Abbe, Her Work and WAD, by Anne Bromer was published jointly by the Boston Public Library and the Society of Printers. The book is available at its original price of $75.00, most of the proceeds benefiting the Library.

Below are details of our publications in chronological order, noting the publication price for books in print. Out of print books become available from time to time. Check our inventory for specific titles. 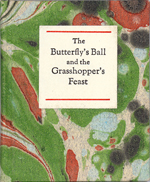 THE BUTTERFLY'S BALL AND THE GRASSHOPPER'S FEAST, by William Roscoe. Illustrated with original wood engravings by Sarah Chamberlain. This is Chamberlain's first commission.
A. Regular edition, 100 copies.

B. Deluxe edition, 25 copies in leather, with extra suite of illustrations in rear pocket.
1977
Miniature 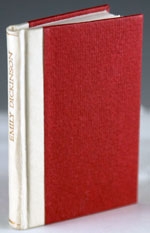 POEMS OF LIFE, by Emily Dickinson.
Printed by William and Raquel Ferguson.
A. Regular edition, 100 copies. 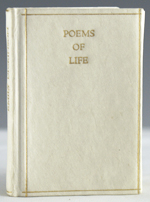 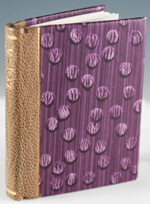 NO. V-109, THE BIOGRAPHY OF A PRINTING PRESS, by Henry Morris. This is the first Checklist of the Bird & Bull Press.
A. Regular edition, 115 copies. 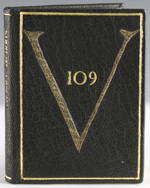 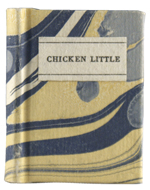 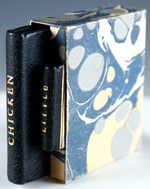 THE CASK OF AMONTILLADO, by Edgar Allan Poe.
Illustrated by Linnea Gentry.
A. Regular edition, 125 copies. 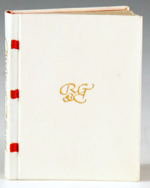 TWELVE OF HEARTS, by Robert Gould and Colleen.
Edition of 36 copies, with paintings by Gould and calligraphy by Colleen. Bound in white vellum.
1983
Miniature

B. Deluxe edition, 100 copies, of which 80 were for sale. Hand-colored illustrations by Gorey and special binding with slipcase.
1983
Miniature

CARMINA SAPPHICA, by Horace.
Only miniature of Ashendene Press.
150 copies printed on the Ashendene Albion handpress from the original photo-engraved plates of the Press. Bound as the extremely rare original edition (less then ten copies) in burnt orange morocco. Protective box.
1984
Miniature Manuscript

A GARDEN COMPANION, by Melissa Sweet.
Whimsical painted alphabet, incorporating the letters within a garden setting.
Edition of 30 copies. Bound in red morocco with the alphabet in gold on front cover. Protective box.
1984
Miniature First Edition 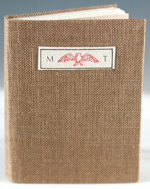 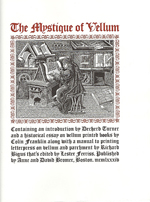 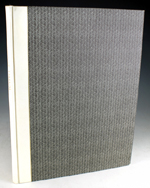 A. Regular edition, 225 copies on handmade paper, with specimen sheet on parchment. Cloth binding and box. 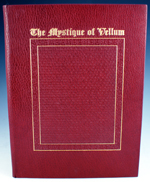 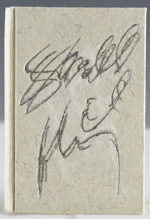 SHALL I DIE? SHALL I FLY?, by William Shakespeare.
Printed by John Kristensen, calligraphy by Suzanne Moore, binding by Donald Glaister.
A. Regular edition, 125 copies. 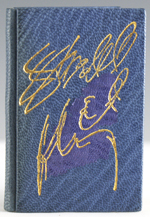 B. Deluxe edition, 35 copies with illuminated initials and in designer morocco binding with slipcase.
1987
Miniature Catalog 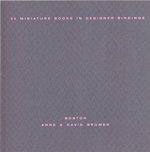 35 MINIATURE BOOKS IN DESIGNER BINDINGS, 1987.
Full-color catalog designed by Gunnar Kaldewey. First collection of miniature designer bindings to be offered for sale. Represented are whimsical, typographic, abstract, and symbolic examples from the world's leading bookbinders. The catalog, housed in a plastic CD-type case, received a certificate of merit from the Printing Industries of America. We continue to commission designer bindings on miniature books and welcome your inquiries.
1989
Miniature

B. Deluxe edition, 110 copies, of which 85 were for sale. Hand-colored in metallic inks. Housed in slipcase.
2001
Private Press 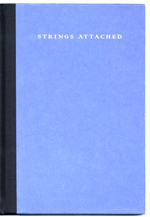 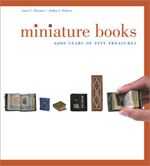 MINIATURE BOOKS: 4,000 YEARS OF TINY TREASURES, by Anne C. Bromer and Julian I. Edison. Published by Harry N. Abrams in association with The Grolier Club.
A. Regular edition.

B. Deluxe edition, 200 copies for sale, signed by the authors and including a facsimile of the book in miniature format, together in a specially designed slipcase.
2011
Trade Publication 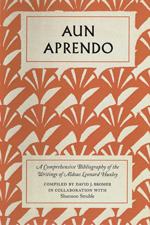 B. Deluxe edition, 40 copies for sale, signed by the bibliographer and numbered, with a previously unpublished poem by Huxley.
2016
Miniature 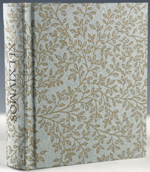 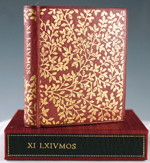 "Elizabeth Cary Agassiz: Ahead of her Time and of her Time," April 2013 lecture presented by Anne Bromer at the Nahant Historical Society.

"We're Still in Love With Books," by William Pannapacker, The Chronicle of Higher Education, December 4, 2011.

"More About 'The Proclamation of Emancipation by the President of the United States'," Miniature Book Society Newsletter, No. 85, November 2010.

"Miniature books a business as well as a passion for Bromer," by Debra Glidden, The Daily Item, November 30, 2009.

"Tiny books have a big tale to tell: Light and portable, miniature tomes are valuable," by Hinda Mandell, The Jewish Advocate, June 1, 2007.

"Leafing through some tiny treasures," by David Mehegan, Boston Globe, May 1, 2007.

"A Love Story: We Download Music and Movies, and We Get Our Information from Screens. So Why Do We Still Read Books?" by David Mehegan, The Boston Globe, November 15, 2006.

"Digest: First Person Singular," Fine Books & Collections, May/June 2006. Interview with Anne and David Bromer about the company, their new Rare Book Fund at the BPL, and news on their respective books.

"XI LXIVmos. Memoirs of A Biblio-Midget," presented by Anne Bromer as a lecture to the Society of Printers on the occasion of their Annual Meeting, May 6, 1992.

"Revolution in American Fine Printing", presented as a lecture to the Society of Printers, 1984. Reprinted as an article in American Book Collector, 1985.

"Press Books", BCAR Publications. Reprinted with permission from the Annual Report of the American Rare, Antiquarian, and Out-of-Print Book Trade, 1978-1979.